While this year’s Cabin Fever Speaker Series has come to a close, all of us here at Long Branch will continue to think about what we learned and are already looking forward to next year’s series! Despite some schedule shifting that had to take place because of bad weather, 2015’s series was a great success, with talks focused on history and tradition. 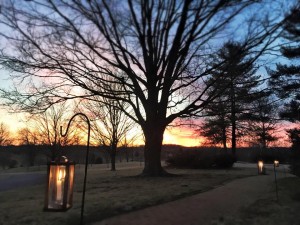 Our series kicked off on March 12 with a talk from historian David Goetz, an expert on Confederate cavalry commander John Singleton Mosby. His book, Hell is being Republican in Virginia: The Post-War Relationship between John Singleton Mosby and Ulysses S. Grant, was released in 2012 and it was this subject which was the topic of his talk. We heard background about Grant and Mosby’s lives, as well as the role each played during the Civil War, and then traced their relationship after the war when they both worked towards reconciliation between the North and South. Despite the dislike that those in the South felt towards Grant, and by extension towards Mosby for aligning himself with “the enemy,” Mosby understood the importance of reconciliation and dedicated himself to this cause, becoming a very controversial figure, particularly in his native Virginia.

Our speaker in week two was award-winning storyteller Adam Booth, who also participated in our series in 2014. This year he told us two different traditional Appalachian stories and sang us a ballad. The first story, called “Raw Head and Bloody Bones” (a scary name, but an excellent story!), was learned during a fellowship at Berea College in Kentucky. Booth is committed to studying traditional storytelling in Appalachia and often learns from veteran storytellers, but had interestingly learned this story from recordings of young storytellers.

The Civil War theme continued in week three with local singer/songwriter Clark Hansbarger speaking about the creation of his 2013 album “Dream of a Good Death: New Songs of the Old War.” We heard the stories behind five songs off this album, and then got to hear the songs themselves! The audience learned interesting facts that Hansbarger discovered throughout his research and writing. For example, did you know that 40% of the soldiers that died during the Civil War were unidentified? And that number jumps to 60% for African American soldiers. Quite the sobering fact. 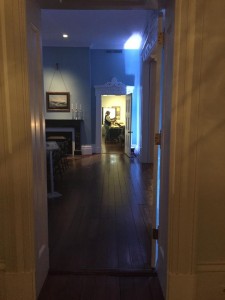 The final talk for 2015 took place on April 2, when Monticello’s head vegetable gardener Pat Brodowski cam to speak about historic gardening. She demonstrated early pieces of agricultural equipment and showed us samples of edible plants while explaining how the Monticello gardeners harvest seeds to use from one year to the next. We also learned about many of the ideas that Thomas Jefferson had about gardening and how these ideas are still in use at Monticello, including planting in a quincunx pattern as the ancient Romans did.

This year’s series was fascinating, informative, and just plain fun! Long Branch wishes to thank all of our speakers, as well as those who attended our talks. We hope to see you all again for next year’s speaker series!

To see more photos, please visit us on Facebook at https://www.facebook.com/LongBranch1811