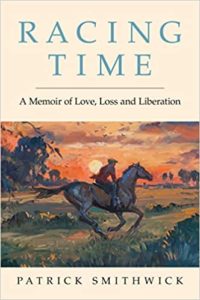 Listen to Patrick Smithwick discuss his third book, Racing Time: A Memoir of Love, Lose and Liberation. Starting at the age of twelve, Smithwick began working with his father and mentor, the legendary steeplechase jockey, A.P. Smithwick. Patrick worked his way through college by exercising Thoroughbreds at the major East Coast racetracks and by competing in steeplechase races at Belmont Park, Monmouth Park and Saratoga as well as at hunt meets, such as The Maryland Hunt Cup and the Grand National. He received a Bachelor of Arts from Johns Hopkins University in 1973 and a Master of Arts in Creative Writing from Hollins College in 1975. In 1988, he received a Master of Liberal Arts from Johns Hopkins University, and in 2000 his degree in Education for Ministry. A newspaper writer for several years, Patrick began teaching English, philosophy, photography, and journalism at both the high school and collegiate levels. In addition to Racing My Father and Flying Change, he has written The Art of Healing: Union Memorial Hospital and Gilman Voices, 1897-1997. Patrick lives with his wife Ansley, Associate Head of Oldfields School, on the Monkton horse farm where he was raised.

About the Book: Racing Time is a book of searing intensity shining a healing light into the wounds of loss. Most of all, it is a celebration of life-long friendships with three men–each outspoken, authentic, and a lover of the out-of-doors. In a period of nine months, Smithwick delivers the eulogies of these three who have been his nexus to the world of steeplechasing and Thoroughbred racing. Written to stand on its own, Racing Time is the third of a trilogy, following the memoirs Racing My Father and Flying Change. It continues with the vivid prose and sensory descriptions of the first two books, then takes a different path, delving deeply into the psyche of men, showing one man’s love and respect for another, sometimes his anger and disappointment, and always his sense of loyalty and wonder. Smithwick takes the reader through the joy and excitement of shared youthful experiences, into the camaraderie of adulthood, and ends with the clap of a thundercloud calling on us all to live life to the fullest.

The talk will begin at 7:00 pm and last approximately one hour, including time for questions and comments from the audience. Attendees will have a chance to socialize beforehand over drinks and light hors d’oeuvres, beginning at 6:30 pm. Tickets are $15.00 per person in advance and $20.00 at the door. Long Branch Historic House & Farm, 830 Long Branch Lane, Boyce. Register on-line at www.visitlongbranch.org or call 540-837-1856.