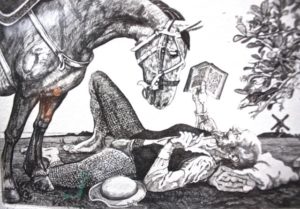 Artist William Woodward claims there are only three parts to the culture of Humanity: Pre-Equine, Equine and Post Equine. In this lavishly illustrated lecture /presentation Mr. Woodward will show striking examples of how horses have been depicted world wide, from the caverns of prehistory to the modern period.

This is the last of several events to meet and hear Bill Woodward speak about art during his exhibit at Long Branch. The talk will begin at 6:00 pm and last approximately one hour, including time for questions and comments from the audience. Attendees will have a chance to socialize beforehand over drinks and light hors d’oeuvres, beginning at 5:30 pm. Ticket cost is $25.00 per person.

About the Artist
William Woodward, a third-generation native Washingtonian, is among America’s most sought-after and admired classically trained painters (the Florentine Accademia di Belli Arti, the Corcoran School, and The American University). The recipient of multiple awards and commissions, Woodward’s works have been acquired by museums, as well as scores of corporate, public and private collections. Woodward, as director of George Washington University’s MFA program in Studio Arts for more than thirty years, has mentored three generations of artists in the techniques of the great masters, and is a popular guest speaker at prestigious venues such as the National Gallery of Art and the Smithsonian Institution in Washington, DC.

Woodward has been called a “virtuoso, a painter’s painter” by Rafael Squirru, former Cultural Director of the Organization of American States. Benjamin Forgey, art critic of The Washington Post, observed, “[Woodward’s] paintings are alive with knowledge, translated from eye to hand…. It’s really wonderful what he can do. His ability to draw, his feeling for the figure in space, his understanding of dramatic situations – his skills have kept developing in the 25 years that I’ve observed him.” The highly respected artist and TV commentator, Bill Dunlap, voiced the opinion of many fellow artists: “I admire him and think him the best pure painter of our generation!”