The Fry-Jefferson map of Virginia was drawn in 1751 by Joshua Fry and Peter Jefferson (father of Thomas Jefferson). Highlighted are two Shawnee camps along the Cohongoronto (Potomac) River. 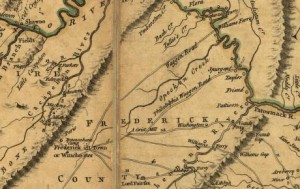 Most Indian settlements—and later, European settlements—were positioned along the Opequon Creek, a tributary stream of the Potomac River. 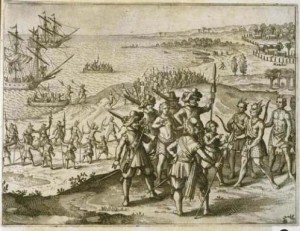 Scenes of negotiations between European settlers and Virginia Indians, such as the one that appears in this 1634 engraving by Theodor de Bry & Matthäus Merian, dotted the Virginia landscape throughout the 17th and 18th centuries.
Courtesy of the Virginia Historical Society.

Native Americans in the Shenandoah Valley

When European settlers first beheld the Shenandoah Valley at the dawn of the eighteenth century, the land had long been familiar territory to the Native Americans of the region. Although it appeared largely vacant at the time, it had been home to various tribes for twelve previous millennia. The tribes occupying the Shenandoah Valley in the long period prior to the arrival of English settlements include the Iroquois (also called the Six Nations) and Shawnee nations as well as the Catawba and Cherokee nations of the south and the Delaware and Susquehannock nations of the north. Many of the rituals, languages, and values of the factions of these tribes that occupied the Shenandoah Valley are unknown today; however, some customs were recorded by English surveyors in the eighteenth century.

Today, we know that leaders of these tribes were selected through merit rather than through any hereditary right. A tribesman was deemed leader if he demonstrated the ability to influence his peers. No person held absolute power, and ideals were not forced on any member. As matriarchal societies, women of these tribes wielded considerable power, maintaining both property and influence. Respect for the land being one of the principal values of Indian societies, the land they once occupied was left largely unmarked by their presence. One of few indications of prior Indian occupation in the eighteenth century was what came to be known as “Indian old forests,” tracts of land where trees had been burned to facilitate quicker travel. These leveled areas would later become ideal locations for English settlers who desired land near water that they did not have to clear themselves.

Comments made by Virginia Governor William Gooch reveal some of the hunting practices of tribes in the Shenandoah. Referring to European settlers, Gooch called their hunting practices “unaccountable” and “vagrant.” These practices—not being reflected in the European societies from which the settlers had migrated—suggest that they had likely observed the hunting strategies of Indians and sought survival using the same tactics. One such tactic was to set a forest on fire so as to gather a group of deer, which they would then shoot. The practice of hunting on a neighbor’s land without permission was also considered “vagrant” and had perhaps been adopted from Indian practices.

The Shenandoah Valley had been occupied by Native Americans for more than a hundred centuries before the European settlers first arrived. As the land evolved over the centuries to accommodate the warming climate and diversifying environment, its inhabitants grew and diversified along with it. Eventually, as territorial conflicts among tribes developed, the Shenandoah Valley was essentially abandoned, serving less as an inhabited space, and more as a buffer between enemies and a route of travel for war parties.

It was this ostensible vacancy, along with the rich and arable environment, that encouraged European settlers to occupy the land. Before long, in the very same region where Native Americans had evolved over millennia along with the natural landscape, European settlers had divided the land, rectified townships, and established themselves as the sole proprietors of the Shenandoah Valley.