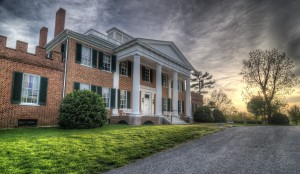 Long Branch, like many surviving historic homes reflects changes in ownership and the evolution of architectural styles over time. With each new owner Long Branch was modified to accommodate their changing needs and tastes. Some of these changes complimented previous owners influence while others transformed it. Long Branch’s architectural history can be broken down into four distinct periods. These periods represent new owners and significant changes to the structure and architecture of Long Branch.

In the early summer of 1811, Robert Carter Burwell started construction on a Federal style mansion. The original plan of the house was a collaborative effort between Burwell and an unknown local architect-builder.  The plan was similar to the design of Carter Hall, a home built around the same period that is located only a few miles from Long Branch. The Flemish-bond, hand pressed, brick mansion had seven windows across the second story and six windows and a centered door on the first story. In typical federal style the windows were six-over-six, sash windows made with crown glass. Originally, a shallow roof with round-butted wooden shingles existed. The South elevation likely had a recessed wooden porch with two-story in antis columns. The East Wing was a loggia; partially enclosed space featuring a brick colonnade. This wing had direct access to the dining room and was next to the summer kitchen.

The interior of Long Branch looked very different from present day. Houses of this size and standard would have taken many years to build. It is unknown how far Burwell was with construction before he died in 1813 during the War of 1812. Many of the home’s finer details were likely not finished while he was alive.  The original layout, however, has remained intact, with two rooms off the central hall. The second story matches the first, with two rooms located either side of the stair landing.

During construction, Burwell sought the guidance and recommendations of architect, Benjamin Henry Latrobe. Through a series of six letters penned by Latrobe, he advised Burwell to alter his plan for the house and add a second, service staircase to the plan. This second staircase, to the left of the central stair, allowed for servants to access portions of the house without being in view of the family and guests. Based on surviving letters, we know that Latrobe sent Burwell plans for the house during construction; however, the first attempt failed, as it was lost in the mail. There is little evidence to prove whether a second attempt to send them was successful or that Latrobe ever visited the site.

After Burwell’s death, he willed the property to his sister Sarah Nelson and her husband Phillip. It is unclear when Phillip and Sarah Nelson moved to Long Branch. At the time of Burwell’s death in 1813, the Nelson’s were living at Rosney, located less than two miles from Long Branch. Little is known about their early occupation; however by 1831, the Nelson’s had opened a school for girls on the property.

In 1842, Phillip Nelson sold Long Branch to his nephew Hugh Mortimer Nelson and his wife Adelaide. Shortly after moving to Long Branch, Hugh and Adelaide renovated and expanded the home. It is noted in their tax assessment of 1845, an increase in value for new building. The Federal style building was transformed into the Greek Revival house we see today.

The Nelson’s enclosed the loggia of the east wing adding three windows and door between the old brick columns. This is possibly when the battlements were added to the roof of the wing. One of the largest changes to the exterior was the addition of two porticos. The north elevation uses Tuscan Order columns, with the south elevation using Ionic Columns. The new porches had wooden flooring and limestone steps. The door surround on the north elevation would have been added at this time to match the Greek Revival style. The Nelson’s also added the belvedere to the roof and its attached railings.

The interior of the house was also dramatically altered during this period. The original staircase was removed and the hanging spiral staircase that we see today was added. In order to add the staircase they had to black out the center window on the second story and the window above the door on the north side of the house, which can still be seen today. The interior woodwork designs seen in all of the woodworking throughout the house were based on Minard Lafever pattern books, particularly “The Modern Builders Guide” and “The Beauties of Modern Architecture” published in 1853 and 1835 respectively. The woodwork in the parlor and dining room are some of the best examples of Greek Revival woodwork in the country. Another touch, most likely from Adelaide, was the French Dufour wallpaper with scenes from Paris and Naples.

After the Civil War ended, Adelaide was faced with paying off her late husband’s debts. In 1875, Hugh Nelson Jr. inherited the estate from his mother. With legal troubles and debtors, there was little money left to renovate the house. The house remained almost unchanged during his ownership. Hugh Nelson Jr. installed indoor plumbing and two bathrooms were added. Building a wall in the northwest room created a bathroom on each floor, almost identical to each other.  A familial oral history suggests that Hugh Jr. was very proud of the addition of indoor plumbing to the home, and that when guests would arrive to Long Branch, he would immediately show them the “first flushing toilet in Clarke County.”

After Hugh Jr.’s death in 1915, his wife, Sallie Page Nelson took over ownership of the house.  In an attempt to add modern heating, a furnace was installed in the basement and a grate in the center of the entrance hall was added. Subsequent alterations to the heating system had the grate removed and the floor replaced. Sallie Page had electricity added after World War II and her granddaughter, Rosalind Huidekoper paid to have a modern kitchen installed.

In 1957, the house was sold to Abram and Dorothy Hewitt in considerable disrepair. The Hewitt’s made numerous repairs to the structure but did not make any structural changes. During this time, they laid the concrete floor in the basement, added the basement bathroom, and constructed a wall within the east wing to create a small library and a new dining room space.  The Hewitt’s took out the door of the east wing and replaced it with a fourth window. Most of their work was done to improve the modern amenities of the house: adding copper plumbing, rewiring of the home, replacing the coal-burning furnace with a modern oil furnace and installed ducting. They also partitioned the southeast bedroom on the second floor to create and dressing room and third bathroom.

In 1965, the summer kitchen collapsed after a heavy snowstorm. The Hewitt’s rebuilt it slightly larger than its original footprint. They used paneling from a sheep shed and installed a bathroom and used the space as an office.

After 1971, the Hewitt’s sold Long Branch and it was purchased and sold numerous times thereafter.  With each transition of ownership, Long Branch fell further into disrepair. There were no significant changes to Long Branch throughout this period; however, it was during this time that the French Dufour wallpaper was removed.

Having had many owners throughout the late 1970s and early 1980s, Long Branch was finally sold at auction to Harry Z. Isaacs in 1986. His additions and renovations can be seen extensively throughout the house. The porticos, originally constructed of wood with limestone steps, were replaced with marble. The asphalt shingle roof was replaced with a standing seam tin roof. In Isaac’s restoration a number of materials were replaced with replicas and new construction materials made to match the original. The railings and balustrade of the belvedere, the shutters, the chimneys stacks, select brickwork, lattice vents, columns on the north and south porticos, the ceiling of the south portico, the pediment above and adjacent to the entry door were all replaced or reconstructed.

During his renovation, structural problems also dictated extensive reconstruction. The ceilings where raised six inches and the southern wall’s window configuration was changed from four windows to three. Isaacs removed interior walls to enlarge the dining room space at the expense of the kitchen. The kitchen was then remodeled with modern amenities. Isaacs also removed the stairs adjacent the kitchen to make a pantry space.

The bathroom on the first and second floors were removed and brought the rooms back to their original dimensions. The northwest room on the second floor was converted into a bathroom/dressing area, while the bathroom of the southeast room was remodeled and reconfigured to hold a walk-in closet.

The west wing was added to balance out the asymmetrical design of a single wing. This wing was designed as a replica of the east wing and contained another bedroom, a dressing room, and a bathroom to the north.

Along with the main house, historically there would have been numerous outbuildings close to the house. These outbuildings would have been of simple construction and largely dated to the mid-19th century. The remaining outbuildings, including a surviving slave quarter, were demolished by Isaacs except for the smokehouse and the spring house.

Federal: Architectural style popular from c. 1780 and 1840. A simple box plan, one or two rooms deep, with door and windows arranged in strict symmetry.

in antis columns: columns that sit between a wall supporting the roof of a portico. Often seen in Greek temples

Tuscan Order: Roman column order, similar to the Doric order but having an unfluted shaft and simplified base.

Ionic Columns: One of three main orders of Greek architecture. Characterized by two opposing volutes on in the capital. Typically described to have the look of a scroll.

Minard Lafever: American architect of churches and houses in the mid-19th century. His published guides and pattern books were an influential part in the spreading of the Greek Revival movement.