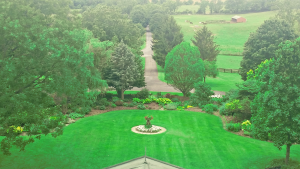 The landscape and gardens of Long Branch Historic House and Farm have changed considerably over its 200 year history. Throughout the 1800s, when Long Branch was an active wheat plantation, the mansion was supported by a greenhouse, an orchard, and kitchen gardens that contained herbs, vegetables, and flowers which were tended to by enslaved African Americans, and later paid workers. Early records indicate that roses, chrysanthemums, and violets were raised in the greenhouse, cherry and peach trees were planted in the orchard, and potatoes and strawberries grew in the kitchen garden. Additionally, slaves managed their own garden plots near their quarters to supplement their weekly rations.

By the 1930s, the antebellum gardens were lost and a travel guide description of Long Branch stated “There is no garden.” By the late 1950s, Long Branch blossomed once more with the arrival of a new family, the Hewitts, who reintroduced flower and vegetable gardens near the home.

Today, the grounds surrounding Long Branch boast the Sheila Macqueen Gardens. Dedicated to the doyenne of British flower arrangers, Sheila Macqueen, the gardens feature herbs, hellebores, hostas, Constance Spry Roses, and numerous plant species native to Mrs. Macqueen’s English Gardens. Macqueen was known in Britain first through BBC lectures and books (many still in print), and later due to her flower arrangements for the Royal Family in Westminster Abbey, Buckingham Palace, and Windsor. Her career began in 1931 as an associate of the first leading British Flower school, Constance Spry, and continued more than 70 years.

Long Branch boasts the only garden in the United States named in Sheila Macqueen’s honor due to the hard work and passion of the late Martha Cook of Clarke County, Virginia. Through their shared love and passion for flower arranging, Sheila Macqueen and Martha Cook became friends in the 1970’s. Around this time, Mrs. Cook arranged workshops to the Costwolds in England, where Mrs. Macqueen would teach amateur flower arrangers from all over the United States.