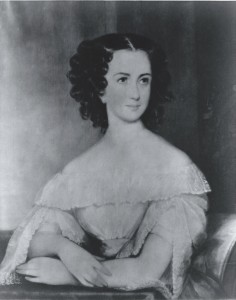 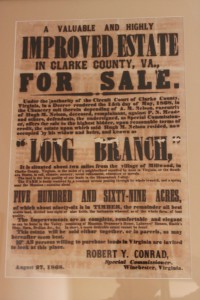 The 1868 Auction of Long Branch

Anna Maria Adelaide Holker Nelson was born on September 22, 1816, the only daughter of John Holker of Manchester, England, and his third wife, Nancy Davis Stackpole of Boston. Nancy’s family was living in the heart of the city, just two blocks south of the Boston Massacre in 1770. John was a merchant in France where he entered into a contract with Benjamin Franklin on behalf of Congress’s Secret Committee to furnish concealed supplies to the Americans. In 1776, he embarked to the Colonies, finally settling Philadelphia, taking over Benedict Arnold’s residence in what would become the executive mansion for Presidents George Washington and John Adams. In 1778, he was commissioned as the first Consul General of France to America. During the Revolutionary War, John was described as having displayed “…a taste and luxury hitherto strangers in America.” Holker moved to Springsbury in Clarke County, VA, where he built the main house in the 1790’s. There Adelaide was raised, however, by the time of her birth, several of John Holker’s business ventures had failed, and he was trying to sell the estate.

When she was 20 years old, Adelaide met her husband Hugh Nelson, and was married that November. After living in Baltimore for a few years, the couple bought Long Branch in March of 1842 and occupied the home with Adelaide’s mother, Nancy, and their 3-year-old daughter, “Nannie”. Adelaide may have been pregnant at the time with their daughter Lucy who was born in 1842, and died as an infant. Their son, Hugh Nelson Jr was born several years later in 1847.

It was at this time the couple renovated Long Branch. One of these changes included putting a distinct Greek Revival stamp on the manor. They built the grand circular staircase in the entry hall, the rooftop belvedere, and the East parlors, as well as enclosed the loggia and most likely added both porticos and the Gothic battlements to the house.

Some details about life at Long Branch in the years leading up to the Civil War are available to us today through a collection of letters written by Adelaide to her daughter, Nannie, who was boarding at a New York finishing school in 1857. Adelaide often expresses her solitude in her letters to her daughter. “I miss you more than I can tell you. Everything is sad and lonely without you and Father,” she writes. Her letters, although full of “little nothings” as she puts it, nevertheless fill in much of the background about antebellum life in Clarke County.

Like a majority of the woman at the time, with her husband working in the fields, attending state agricultural fairs, or off fighting, Adelaide had the responsibility of running the household. However, after the Civil War, with the family in debt and her husband now passed, Adelaide inherited a new responsibility - the finances of the house. After discovering the dire situation of her estate, she looked to create more capital on the land, but on May 15, 1868 the courts ordered Long Branch to be auctioned. With income derived from assets in Massachusetts, Adelaide bought most of the furnishings that were auctioned and remarkably, she purchased back the house and half of the land at the 1869 auction.

Adelaide Nelson spent much of her life fighting for Long Branch, working to keep the land in the family name. Sadly, before the estate was officially returned to the family, she died there of pneumonia, on March 19, 1875. She is buried between her husband and mother at the Old Chapel cemetery in Millwood, VA.

Despite Adelaide’s failure to restore Long Branch to the state it was in when her husband bought the land in 1842, without her devoted work to organize her family’s finances, Long Branch would have left her family’s hands at auction. Instead of losing the house less than thirty years after its purchase, Long Branch stayed with the Nelsons until 1957, an extraordinary 115 years.