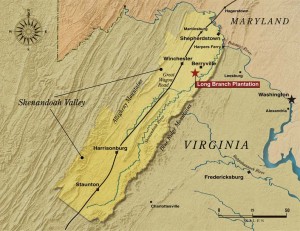 Long Branch Plantation in the Shenandoah Valley circa 1810.

Robert Carter Burwell led a short, yet powerful life in Virginia.  A great-great-grandson of Robert “King” Carter, one of Virginia’s leading tobacco planters, Burwell’s fortune was less extravagant than that of his close ancestors.  He was, however, part of a group of elite families that established a new plantation society revolving around the tiny village of Millwood, Virginia, near which Burwell built one of Clarke County’s most well-known landmarks - Long Branch.

After living with his sister, Sarah, and her husband, Philip Nelson (who helped establish what is now known as the Burwell-Morgan Mill in Millwood), Robert began plans for a grand home on inherited land, choosing Long Branch’s location at the top of a rise in view of the magnificent Blue Ridge Mountains.  He sought out the expertise of Benjamin Latrobe, the architect of the U.S. Capitol, during construction of the impressive manor seen today.

Burwell’s early life is a mystery, however it is known that he joined the Army and fought in the War of 1812.  If he ever lived at Long Branch, it was not for long.  Just before he left Clarke County, Burwell wrote a codicil to his will, bequeathing his land which included Long Branch and nearby Rosney to several family members, and giving “immediate freedom” upon his death to two of his slaves.

During the War, Burwell served as a company captain of the 51st Regiment of the Virginia Militia.  These men helped guard the Tidewater Region, the eastern most area of Virginia.  As a Captain, Burwell proved to be an officer who looked after his men.  In August of 1813, he learned that the company commanders were to be sent home, while their men were to go to the “fatal climate” of Norfolk.  Robert, along with the other officers, protested the assignment, humbly petitioning to go with their men.  They did, and while stationed at Camp Holly near Norfolk, Burwell contracted and died of one of the unknown diseases which flourished in the swamps around Norfolk.  Robert passed away in the fall of 1813, and ownership of his home, Long Branch, in Clarke County, Virginia, passed to his sister, Sarah, and her husband Philip Nelson.