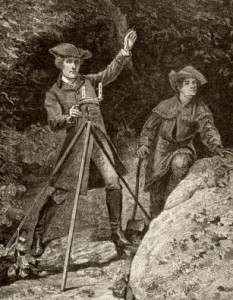 Born to a family of planters, George Washington’s earliest years forecast his future as a surveyor of uncharted territories. His father, a tobacco planter with property in Westmoreland County, Virginia, died when Washington was only eleven. Although Washington inherited his father’s land, his curiosity compelled him to venture beyond the familiar land that he had called home. His father’s death prevented him from traveling to England for the education that his brothers had received before him, and his widowed mother objected to his pursuit of a career in the Royal Navy.

Forced to consider other options, Washington began studying surveying as a teenager. He purchased a schoolbook containing geography lessons and sketched several practice land surveys in the book’s pages, including a survey of the tulip garden at Mount Vernon (then owned by his older half-brother Lawrence Washington). In the early months of 1748, Thomas, Lord Fairfax commissioned the 16-year-old Washington for a month-long trip west of the Blue Ridge Mountains to survey the land. Although he was only an amateur surveyor, the trip was a success. It was during this trip that Washington surveyed the land that would eventually become Long Branch Plantation.

In 1749, after Washington had returned east of the Blue Ridge, Fairfax appointed him as surveyor of Culpepper County. This position gave him the funds to procure his first tract of land in the Shenandoah Valley. When his half-brother Lawrence died from tuberculosis in 1752, Mount Vernon passed to Washington along with part of Lawrence’s role as Adjutant General of Virginia. Washington’s new title put him in touch with Governor Dinwiddie, who in 1753 asked Washington to deliver a letter west of the Ohio River—further west than he had ever traveled—asking the French to vacate the region. Despite French commander Jacques Legardeur de Saint-Pierre’s refusal of Dinwiddie’s request, Washington’s success in reaching the destination and making a safe return established his place as a capable surveyor and diplomat and launched his military career. In September of 1755, Washington oversaw the construction of Fort Loudoun in the north end of Winchester, Virginia. During this time, he used a small log building in town as his office, and it was from this space that he commanded the Virginia Regiment in the French and Indian War.

Washington’s nineteenth-century biographer, Washington Irving, traveled to the Shenandoah Valley to conduct research on Washington’s early life, where he was aided by then-owner of Long Branch Plantation Hugh Nelson. Nelson accompanied Irving to the eighteenth-century home of Lord Fairfax, whom Washington had frequented during his tenure as surveyor of the valley. Though Washington’s encounters with Long Branch may have been brief, his friendship with Lord Fairfax and his accomplishments as a surveyor undeniably shaped the life of landowners in the Shenandoah Valley long before his career as a political and military leader had even begun.