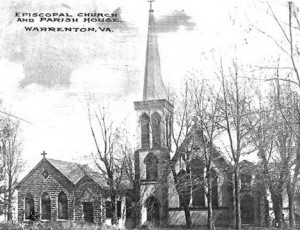 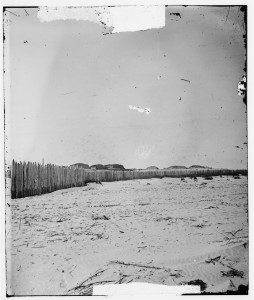 Stockade on Morris Island where GWN was confined under fire with 599 other Confederate officers in retaliation for the CSA placing Federal prisoners under fire in Charleston. [Library of Congress] 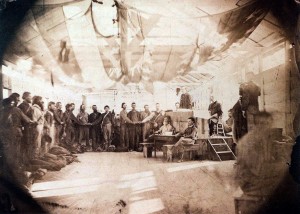 Born in Hanover County, Virginia, just north of Richmond, on May 27, 1840, George was the third child of the Reverend G. W. Nelson and Jane Elizabeth Crease.  Also the great-grandson of General Thomas Nelson, signer of the Declaration of Independence and Governor of Virginia, George was nephew to Long Branch owners Hugh M. and Adelaide Nelson.  His grandfather was a Vestryman at Christ Church, Alexandria, Va, where General George Washington attended services the year he was elected President.  George Nelson’s father died near the year of his birth.  Not long after, his mother married George’s Uncle Philip, brother of Long Branch’s Hugh M. Nelson.

Educated at Hanover Academy in Doswell, Va, George matriculated at the University of Virginia in 1858.  That same year, he was initiated into the Eta Chapter of the Delta Kappa Epsilon Fraternity, UVa’s first fraternity, and the oldest in the Commonwealth, established just 6 years prior.  After graduating with a Doctor of Divinity in 1860, he taught in Caroline County, Va for a year, until joining the Hanover Artillery in 1861.  Entering as a Private, he soon rose to rank of Sargent.

A Captain by April 30, 1862, George, known as “Wash”, had several reviews describing his inadequacy as an officer.  On July 8, 1862, H. R. Berkeley, George’s cousin and a Private in his Hanover Artillery, wrote that Nelson “and his officers…have proved themselves totally incompetent to command a battery.  The company is going to the dogs, and unless something is done, and done very soon, it will go all to pieces.  Wash is as brave a man as I ever saw and fears nothing, but bravery alone will not keep up a battery.  It requires a hard-working, industrious man of good executive ability; one who never tires, and is always on the lookout for his men and horses.  All of these are wanting in him…my mess occupies itself during its leisure time in abusing Wash and his lieutenants for their laziness and want of energy.”

On August 19, 1862, the same soldier noted, “Wash Nelson made a little speech to his company at roll call this morning.  He told them that he had not done his duty by them, acknowledged his faults, and promised, with God’s help, to try and do better in the future, and prayed them to help and support him in his endeavor…this was a good beginning for Wash.  I wonder if he will keep it up. Time will show.  I doubt it.”

On October 2, 1862, Brigadier-General and Chief of Artillery, William Pendleton wrote, "For cool intrepidity and heroic daring-indeed, for the most genuine fidelity and chivalry-Captain Wash. Nelson in unsurpassed.  He has earned high eulogiums on the battle-field, and yet he is not, in some respects, adapted to take care of a battery…[he] would make a splendid aide or cavalry officer, and as such is earnestly recommended."  Nelson was assigned to Pendleton’s own staff after his Hanover Artillery Reserve was disbanded a few days later.  Over the next year, George was commended for performance at Fredericksburg, was Captain and A.A.I.G. to Pendleton, and Inspector of Batteries for the 1st Corps and Reserve Artillery.

While serving as Captain, the 26th of October, 1863, proved a fateful day.  According to his own account, George and a friend, Thomas Randolph, were captured by Union soldiers in Millwood, VA while eating dinner.  In a letter to his cousin, Mary Scollay, on October 28, 1863, George writes, “I am caught at last, my darling Mollie, and that too when I thought I was all safe and sound…we have been treated as well as we could have been.  We stay at night with the officers of the Regiment & if it were not for the fact of guards being all around us you would not know we were prisoner.”  Thus began George’s two-year detention as a prisoner of war.

Their long span apart was bridged with letters expressing a deep love, expectations of exchange, reflections on their faith, and news from home.  On March 14, 1864, George wrote, “Mollie, dearest one, my love for you is so absorbing, that I can look upon nothing as happiness unless shared by you, and all I need to decide that any condition of life will be a happy one, is to know that you will be with me. Need I tell you how sweet the assurance is that your thoughts are often with me in my bland prison?”

Although he initially passed the time with Bible study, reading, and teaching gymnastics to the other captives, over the next 2 years, George’s accommodations would greatly deteriorate.  Initially held captive at Johnson’s Island, OH, George was transferred to Point Lookout, MD after a few months.  He spent most of his time in Hammond General Hospital, where, able to move freely around the whole Point, he found relaxation and enjoyed the breezy beach.  Once transferred out of the hospital, he was put back under guard, and faced a new imprisonment at Fort Delaware, where rumors of an immediate general exchange were every day occurrences.  A transfer to South Carolina’s Morris Island followed, where George became one of the Immortal Six Hundred.

“The Immortal 600” is one story which has gone relatively unnoticed in the history of the Civil War.  Six-hundred Confederate officer POWs were taken to Morris Island, SC, and left in an open stockade in front of Union batteries, directly in the line of fire from the guns of their compatriots located nearby.  This was in retaliation to the similar placement of Union POWs used as human shields at Port Charleston.  The Confederate officers endured 45 days of exposure to “friendly” and Union shellfire.  While at Morris Island, “The 600” was guarded by soldiers from the 54th Massachusetts Volunteer Infantry, the regiment portrayed in the film Glory.  George’s description of the 54th’s commanding officer, Hallowell, is often quoted in books and articles.

George was moved to Fort Pulaski near Savannah, GA, of which he commented, “I cannot do justice to the misery and suffering experienced by myself and seen everywhere around me during this period.”  Exposure to disease, lack of clothing, and starvation almost to the point of death was his existence.  Eventually, in March of 1865, George was on a boat bound for “dear old Dixie”, but instead, orders were received to bring the men to Fort Delaware.  It was there that George faced with the decision to take the oath of allegiance to the United States.

On May 3, 1865, the day he first refused to take the oath, he wrote of his struggles to Mollie.  “I am at a loss to know what to do…I have taken the oath of allegiance to the C. S. Government and I must be convinced beyond a doubt that it has failed before I can abandon it.”  However, a few weeks later on June 12, 1865, upon being asked a third time, George took the oath along with 2,300 of his fellow prisoners.  He was released the following day.  In a letter to Mollie, George cautiously wrote about aching with “the approval of both my reason and my conscious” and the struggle with his pride.  He vaguely explained the motivation of his decision, knowing his letters were read and censored by Union authorities, and expressed fear of losing Mollie if she disapproved.

Mollie quickly responded to comfort him.  Having regained his freedom, George returned home, in poor health, to marry his “darling” on October 17, 1865.  The couple lived with her parents in Shepherdstown, WV, having 11 children, 8 of which lived past infancy.  George’s connection to Long Branch was further deepened when his eldest daughter, Sallie, married his cousin Hugh M. Nelson Jr., the son of Hugh and Adelaide Nelson.  She was the last of the Nelsons to live at the estate.

After farming for a short time in Jefferson County, WV, George felt the call to the ministry and entered the Protestant Episcopal Theological Seminary in Alexandria, VA in 1871.  His ordination followed four years later, where he went on to serve as an Episcopal clergyman in Lexington, Wytheville & St. James Episcopal Church in Warrenton, Va.

George W. Nelson died in May of 1903 and was interred in the City Cemetery in Warrenton.  Never to be forgotten, his words echo in the pages of numerous books and publications regarding “The Immortal 600” and their experiences as prisoners during the Civil War.  His POW memoir can be found at the Virginia Historical Society.