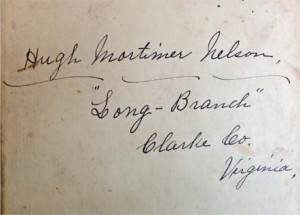 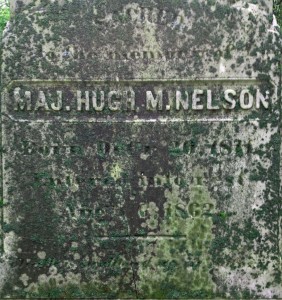 Hugh Mortimer Nelson, born in Hanover County, Virginia, on October 20, 1811, was a well-educated and scholarly teacher, an enterprising and progressive farmer, and a cavalry officer for the Confederacy. Hugh was the fourteenth of fifteen children to Francis Nelson and Lucy Page, and grandson of politician John Page and Declaration of Independence signer, Thomas Nelson Jr.

During his childhood, Hugh Nelson received an early education at home from an elder brother.  At the age of fourteen he was sent to a classical school four miles from his home, and at sixteen he entered the Academy at Winchester.  Moving on to the University of Virginia in 1830, Hugh graduated with a Master of Arts, one of the University’s first graduates to earn the degree.  It is said that while at UVa, “when worn down by work, he would get a fellow student to pump water on his head, to arouse him for renewed efforts.” After graduation, Hugh became a teacher in Charles City County – the university’s first graduate to enter the profession in Virginia.

In 1836, while on a visit to a Virginia spring, Hugh met 20-year-old Anna Maria Adelaide Holker. The two were married that November, honeymooned in Europe, and finally settled in Baltimore where Hugh, after more study, was admitted to the bar. However, before establishing himself in the legal profession, the Nelsons returned to Virginia, a decision which Hugh felt was the great mistake of his life. In a speech at the Virginia Secession Convention in 1861, it seems evident that his reason for returning to Virginia was homesickness.

Back in Virginia, Hugh Nelson bought Long Branch from his uncle Philip Nelson for $32,000.  They moved in with Adelaide’s mother, Nancy D. Holker, and their 3-year-old daughter “Nannie”.  (A son, Hugh Nelson Jr was born a few years later).  It was at this time the couple renovated Long Branch. One of these changes included putting a distinct Greek Revival stamp on the manor. They built the grand circular staircase in the entry hall and the rooftop belvedere, as well as enclosed the loggia and most likely added both porticos and the Gothic battlements to the house.

The house was not the only part of the plantation that changed once Nelson bought the land.  New technologies and techniques in farming started to influence the landowners in Virginia who looked to increase their already rich fields. Hugh rarely returned home from state agricultural fairs, and spent his leisure hours reading both modern and ancient literature. Unfortunately, due to an accident on the farm around 1848, Nelson was advised to go to Europe for surgical treatment. There he witnessed street fighting and protests against the Second French Republic.

In 1861, when the question of Secession was forced upon Virginia, a Convention was called to decide the answer. Nelson remained firm for the Union, and was elected by a large majority to represent Clarke County.  Hugh wrote several letters home while the Convention was in session, in which he gives interesting insight into the tensions in the room. After an ordinance of Secession was passed, he wrote, “When I think of the past, and look forward to the future, it almost unnerves me.”

After raising a company of cavalry in Clarke, he served under J.E.B. Stuart before being reassigned as the aide-de-camp, with the rank of Major of Cavalry, for General Richard S. Ewell, one of Stonewall Jackson’s division commanders.  In May of 1862, under General Ewell, Hugh Nelson joined Jackson’s Valley Campaign.

Hugh was one of 6,402 Confederate soldiers wounded during the Battle of at Gaines Mill on June 27. Given a leave of absence, he went to the house of his cousin, Mr. Keating Nelson, in Abermarle County where he succumbed to typhoid fever, and passed away on August 6, 1862.  He is buried in the Old Chapel Cemetery in Millwood, VA. Hugh had been the first layman to serve at Christ Church in Millwood.  Upon his death, the Vestry wrote that they feel “…each one of them has lost a warm and valued friend; the community a public-spirited citizen; the country a devoted patriot, and the Church one of its most useful members.”

An ever devoted Virginian, Hugh said on March 26, 1861, in a speech to the Chairman of the Virginia Secession Convention, “…of all the stars upon our national flag, the star of Virginia ‘is the bright particular star’ which fills my vision…All my ancestors, for near two hundred years, have lived and died in Virginia…Stern necessity, sir, once compelled me to leave her border—I felt like an exile from my native land —I thought of her by day, I dreamed of her by night.  When laid upon the bed of sickness, in the delirium of fever, I was singing ‘carry me back to Old Virginia.’  I never breathed freely till I got back within her bounds.  …the potent associations of my childhood bind me to her—all the joys and all the griefs of my manhood have daguerreotyped her on my heart—and I can say, as Mary of England said of Calais, when I am dead, take out my heart and you will find Virginia engraved upon it.  May she be my home through life, and when I am dead, may my ashes repose within her soil.”

Hugh’s death left his wife Adelaide in charge of Long Branch’s affairs, marking a change in the history of the plantation.  Not only was the area devastated by war, but Long Branch also suffered from the financial hardships of the now deceased Hugh Nelson.  Thus, the future of Long Branch fell into the hands of the unprepared, but forever resilient, Adelaide.