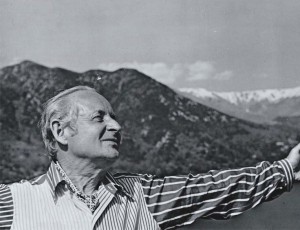 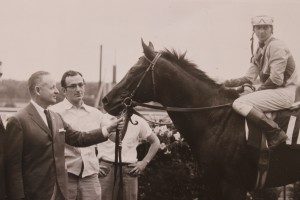 Harry Z. Isaacs with his horse, Intentionally, after wining the race at Belmont, 6.29.1960

Harry Zachary Isaacs was born May 30, 1904. Isaacs was a successful businessman, giving philanthropist, passionate horse breeder, and avid antique collector. Born in Louisville Kentucky, he was raised in Baltimore, Maryland. He graduated from the University of Pennsylvania, where he attended the Wharton School of Finance and Commerce.

Isaacs took over his family’s business at the age of 32. The I.C. Isaacs & Co. was a premium textile business focusing on the manufacturing of britches, jodhpurs, and shirts headquartered in Baltimore, Maryland with plants in Milford, Delaware and Mississippi. Founded by his father, Isaac C. Isaacs in 1913, with a narrow focus on riding gear, the company enjoyed increasing success within the racing community. Focused on high quality products, Harry Isaacs turned I.C. Isaacs & Co. into a worldwide manufacturing enterprise. During World War II, the company began military uniform production. Not until 1945, did production return to civilian clothes. In 1984, Harry sold I.C. Isaacs & Co. to outside investors that extended the business to include general men’s and women’s apparel.  He remained as a consultant until he retired officially in 1989.

An successful horse breeder, Isaacs had farms in Kentucky, Maryland, Florida, and Virginia.  His most successful horse, Intentionally, won 18 of 34 races and earned over $600,000 in its career.  It was also during his time as a horse breeder that Harry met, M. Tyson Gilpin, a leader in Virginia thoroughbred race horses and the individual who would later introduce Harry to Long Branch.

Isaacs was also known for his breeding of dogs and was the president of the Maryland Kennel Club for over twenty years. During that time he bred afghans, bulldogs, and Airedales, and later Rottweiler’s. Isaacs even played a role in establishing the Rottweiler breed in the United States.

After Isaacs sold his horse farm in Florida, he looked to buy another horse farm that was closer to home.  Tyson Gilpin, a long-time friend of Isaacs and native of Clarke County, introduced Long Branch to Isaacs. Isaacs reportedly thought the price for Long Branch was too much considering the work that needed to be done. But after hearing it was to be auctioned, he decided to attend the sale.  $1.3 million later, Long Branch was his. Shortly after the sale, Isaacs started the extensive repairs and refurnishing.

In 1989, Harry Isaacs finished the restoration.  Sadly, a year later, in 1990, Isaacs died of cancer.  Without children, Isaacs wanted his work to live on. He created the Harry Z. Isaacs Foundation to open Long Branch to the public and preserve the house. In 1993, the foundation opened the doors of Long Branch.