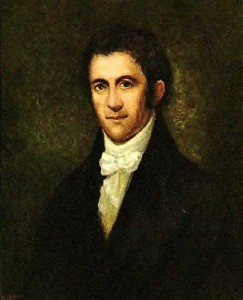 Benjamin Latrobe was a neoclassical architect and is referred to as the “Father of American Architecture,” Latrobe emigrated from England to the United States in 1796 and quickly established his reputation as a superior architect and engineer. His Bank of Pennsylvania (1801) design was influenced by Greek architecture and it was considered to be innovative and unique for the time period.

Thomas Jefferson was impressed by this structure and commissioned Latrobe in 1802.  The U.S. Capitol, White House porticos, Washington Canal, and main gate at the Washington Navy Yard were built under his guidance.  Latrobe’s plans revolved around accessibility, efficiency, logic and American notions of democracy. The Capitol Rotunda exemplifies these qualities. Latrobe wanted to allow public access to government and purposely placed a wide, open rotunda at the center of the Capitol Building. American citizens were the center of the Republic and the Rotunda reflected this philosophy.

Other people were impressed by Latrobe’s work and sought his assistance. The Baltimore Basilica in Baltimore, Maryland was constructed from 1806 to 1821. Latrobe combined traditional European elements with his neoclassical designs. In 1799 William Cramond commissioned Latrobe for work on his estate in Philadelphia, Pennsylvania. Cramond’s Sedgeley Mansion incorporated a portico and Gothic design. Latrobe’s assistance foreshadowed his assistance in Virginia.

Robert Carter Burwell, the original builder of Long Branch, was also impressed by Latrobe’s work. Through a series of six letters, Burwell corresponded with Latrobe seeking his architectural advice in the construction and design of Long Branch. Latrobe suggested the positioning of dining room and chamber and that a servant’s staircase be added to Long Branch. Although there is no evidence that Latrobe visited Long Branch during construction, his influence can be seen. The federal style windows, in antis columns, and simplicity emulate his work in Washington, Baltimore, Pennsylvania, and Virginia.