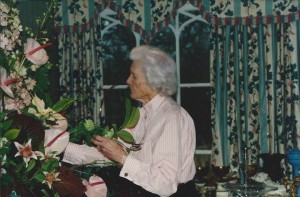 In 1931, Sheila Macqueen began her career working for renowned florist, Constance Spry. Together, they created floral arrangements for the British royal family; decorating Westminster Abbey for the coronation and wedding of Queen Elizabeth II. She also designed flower arrangements for the wedding reception of Prince Charles to Princess Diana at Buckingham Palace. As her career progressed, Ms. Macqueen became one of the leading floral arrangers for the British upper class, making visits to the homes of many wealthy and well-known London residents, like Wallis Simpson.

Ms. Macqueen traveled extensively through the British Isles, Europe, Australia, Africa and North America. A frequent speaker for the Garden Club of America, she made numerous appearances on the BBC and was the author of several bell-selling books. Hailed as the “first lady of flower-arranging,” Macqueen spent much of her time hosting lectures and demonstrations to her loyal followers.

Ms. Macqueen began her friendship with Long Branch through Mrs. Martha Cook, a resident of Clarke County, Virginia. In the early 1990s, Macqueen held a four-hour demonstration to gardening students at Long Branch and created beautiful flower arrangements for the house. The gardens of Long Branch, due to the hard work and passion of Martha Cook, are dedicated to this famed floral arranger.