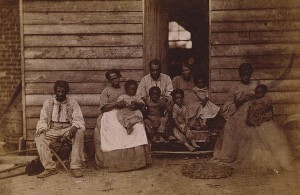 Slave family or families posed in front of wooden house in DC or Hampton, VA, 1861. [Library of Congress]

The story of enslaved people at Long Branch is difficult to ascertain. Substantial written records are not present, but available accounts and modern scholarship can give us an idea of enslaved life at the estate. Agriculture is the key component to understanding life in Virginia, the Shenandoah Valley, and Long Branch. From the 17th century until the 19th century, tobacco was the state’s cash crop that generated tremendous wealth. Large quantities of tobacco were needed to maximize profits and planters turned to the Atlantic Slave Trade to secure a labor force. African American toiled on tobacco farms for many years before tobacco depleted the soil. Wealthy, white, land owning men began to realize in the late 18th century that diversifying crops was essential to economic survival. Men like George Washington, the first president of the United States of American, and Robert Burwell, the original owner of Long Branch Plantation, were among the men that moved away from tobacco cultivation towards wheat and grain.

This shift did not drastically change the life of an enslaved person. Traditionally slaves on Tobacco plantations in Virginia were forced to work in a gang labor system. Men and women were divided according to gender and spent the entire day working in fields. Children were separated from their parents and cared for by elderly family members until they were ready to work in the fields. This system was year round and unrelenting. Growing tobacco was an intensive process and allowed for virtually no free time. In South Carolina and northern regions of Georgia the slaves were forced to work in a task labor system. Cultivating rice was dangerous, but it required certain tasks that when completed, allowed for “free time” at the end of the day. Slaves that worked in the task system could use this time to grow additional crops and spend more time with their families.

Historical research indicates that the emergence of wheat and grain cultivation was an economic necessity. Growing tobacco caused soil depletion and Virginian plantations required greater efficiency and year round work to make wheat profitable. Long Branch’s 20-30 slaves were likely not immune to this shift . The gang system with the gender division of labor and very little family time was still in play. Slaves during this time period became skilled at a variety of different jobs. Clearing fields and planting, harvesting, and grinding wheat was part of the new slave expertise. Another factor forced slaves to broaden their skills sets. Early in the 19th century the international slave trade was outlawed the internal slave trade developed. Slaves from Virginia were sold to cotton and rice growing states in the Deep South. Wheat plantations were not as profitable as tobacco plantations and excess slaves were a financial burden and asset. Thousands of slaves were sold to the Deep South and slave families were destroyed. This created an increased work load for slaves left behind in Virginia. More time was spent in the fields to make up for the lost labor and different skills needed to be learned to survive. Estates that were able to hold onto large numbers of slaves, rented out their extra hands to neighboring plantations or local industries such as mills, blacksmiths, and factories. Based on the historical record it is logical to believe that Long Branch slaves were skilled at a variety of jobs as well.

Domestic/house slaves also felt the sting of the internal slave trade. With so many slaves being sold to the Deep South, workloads undoubtedly increased. Cooking, cleaning, midwifery, and assisting the mistress and her children were the primary duties of a domestic. Women were the backbone of this work force, but enslaved children also helped with these duties. A domestic slave was constantly on call and very seldom encountered their family members. Scholars believe that being on constant call and removal from the field slaves brought on a unique level of stress and anxiety for domestics. Food and clothing were typically better than what field slaves endured, but there was always the risk of sexual impropriety towards house slaves. Children from forced sexual relations often suffered mistreatment from the mistress and even the owner.

After the Civil War many things changed in Virginia, Clarke County, and Long Branch. The Historic Census Browser, provided by the University of Virginia, reveals part of the story. According to the 1860 census numbers, a total of 3,439 enslaved and freed people lived in Clarke County. There were 344 slave holders in the county and 108 of them held 29 slaves or less. The western part of Virginia typically held fewer slaves and in less concentrated numbers than the Tidewater region. The 1870 census numbers reveal that 2,159 freed people of color were living in Clarke County. This number indicates that 1,280 African Americans had left the county. Many reasons contributed to the exodus of freed African Americans during the post-war time period. A perfect example is Samuel Johnson, a freed man of color, in nearby Fauquier County. Johnson secured his freedom early in the 19th century and spent his entire life trying to free the rest of his family. He managed to carve out a modest existence in Warrenton, Virginia and was respected in his community. As the century wore on, the attitudes towards freed people of color hardened and laws were passed that prevented Johnson from freeing his family. The opportunities that Johnson enjoyed were no longer viable for his daughter, son-in-law, and grandchildren. The son-in-law abandoned the entire family for a better life in the North. Johnson could not pass on his land to his enslaved daughter and she left Warrenton for Washington D.C. Jobs, better treatment, and community was available in the District. Many newly freed people left their local area for better employment and to find family members that had been sold in the internal slave trade.

Enslaved workers at Long Branch may have followed a similar path or continued to work at the plantation. Local farms did not stop growing the wheat and grains after the war. Share cropping was very common in the post-war period and former slaves were skilled in agriculture. As indicated in Johnson’s story, many African Americans were part of the local community. Leaving behind what had been familiar would not have been easy for many.